Be Wary of the Fallacious Net Household Debt Argument

Posted by John Adams | Chief Economist at As Good As Gold Australia on August 03, 2018

Australians should treat claims that household debt is not a concern carefully.

In recent weeks, two prominent columns, one by Don Stammer, titled ‘ Housing crash unlikely, based on real debt levels’  in the Australian published on 19 June 2018 and another by Michael Pascoe titled, ‘Why household debt is not as scary as generally claimed’  in the New Daily on 25 July 2018 have both argued that Australian household debt levels is not a significant macroeconomic concern.

Both Stammer and Pascoe claim that once household deposits are considered in the debt equation, which as of March 2018 stood at $AUD 1.07 trillion, Australia’s economic outlook does not appear to be all doom and gloom.

There are, however, several important elements in the household deposit and debt story which both Stammer and Pascoe conveniently ignore which, when considered, debunk their core thesis. These elements include:

On the liability side this means that mortgage debt has been incurred by some households for the purposes of funding a business venture, while alternatively, on the asset side, this means that a proportion of household deposits are tied up with sole trader and partnership businesses.

What this means is that, according to the Australian Bureau of Statistics (ABS), $AUD 90.5 billion as of March 2018 of the total $AUD 1.07 trillion in household deposits is tied up with unincorporated businesses including money relating to business working capital, PAYG tax, GST, employee superannuation contributions or provisions for employee entitlements such as annual leave. 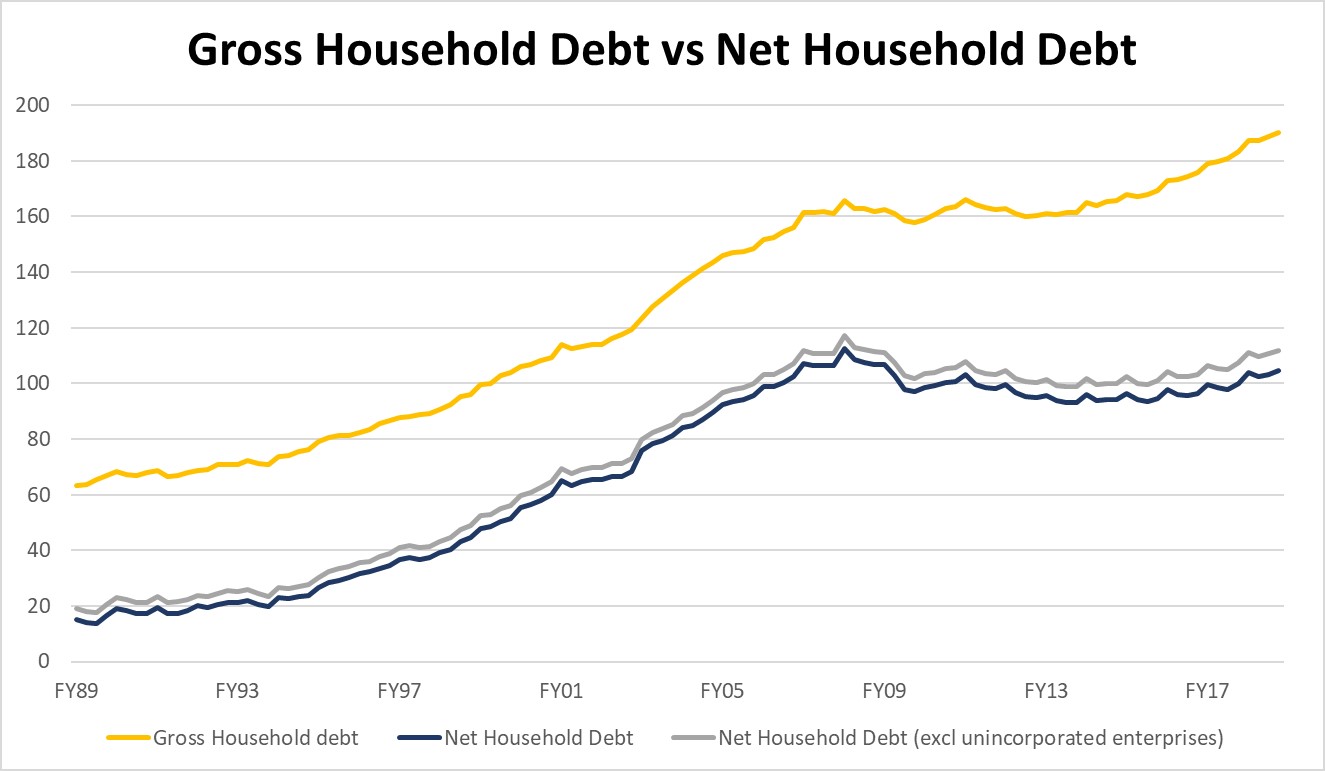 Two, arguments relating to net household debt fail to recognise the distribution of household deposits and debt throughout the Australian economy.

Moreover, the RBA data shows a significant mismatch among Australian households between the ages of 25 and 54 year regarding the amount of deposits and debt that they possess as shown below in table 1.

This distributional mismatch means that different households hold different levels of savings and debt and therefore those who require additional cash to meet expenditure and debt obligations are unlikely to have access to required funds.

Given the rapid growth of household debt from 2014 to 2017, the mismatch between deposits and debt among under 55-year-old Australian households is likely to have been exacerbated.

Such a statement is supported by independent household survey data collected and published by Martin North of Digital Finance Analytics (DFA) whose May 2018 data set found that approximately 56% of survey respondents with a mortgage (across all age categories) had less than $AUD 20,000 in household deposits.

If DFA’s data is extrapolated across the entire Australian household sector, it is clear that many Australian households holding significant sums of debt do not have a sufficiently large buffer to mitigate unexpected changes to their personal cash flow.

Given the crackdown on interest-only loans by the Australian Prudential Regulation Authority (APRA), many households over the coming four years will be required to convert their interest-only mortgage to a principal and interest loan which will result in an increase of required mortgage repayments.

According to RBA estimates, this conversion from interest-only to principal and interest mortgages will, on average, add $AUD 7000 in additional annual mortgage repayments.

For most households without sufficient income to meet these repayment increases, households will be forced to draw down on available savings thus eroding any financial buffer which these households may currently enjoy.

Four, as cost of living pressures continue to rise and wages growth remains flat, the budgets of Australian households continue to be squeezed.

To date, data from the RBA indicates that current consumption levels are substantially higher than current income levels which has resulted in a declining rate of household savings to now its lowest level since December 2007.

As the rising cost of living and flat wages growth phenomenon intensifies, Australian households are likely to draw down on existing savings to fund their current lifestyle and expenditure commitments, rather than substantially cut back on existing financial commitments, thus erode any existing financial buffer that Australian households may currently enjoy. 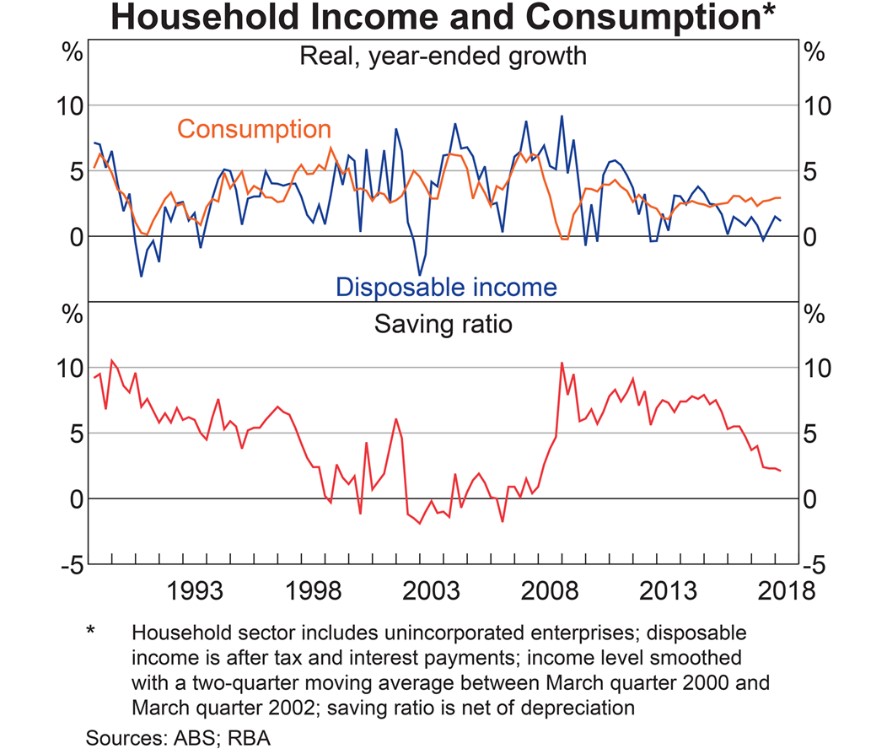 Five, as reported by the RBA in November 2017, approximately 80 per cent of Australian mortgage borrowers have variable interest rates settings on their loans as opposed to fixed interest rate settings.

As global interest rates continue to go up (especially in the United States) resulting from rising global inflationary pressure, this will inevitably result in rising domestic interest rates independent of the RBA as domestic banks, who require approximately 30 per cent of their funds from the international credit market, will be required to pass on increased funding costs onto their customers.

Households with insufficient income to meet higher interest rate costs will be required to draw down existing savings which will further erode any existing financial buffer that these households may have. 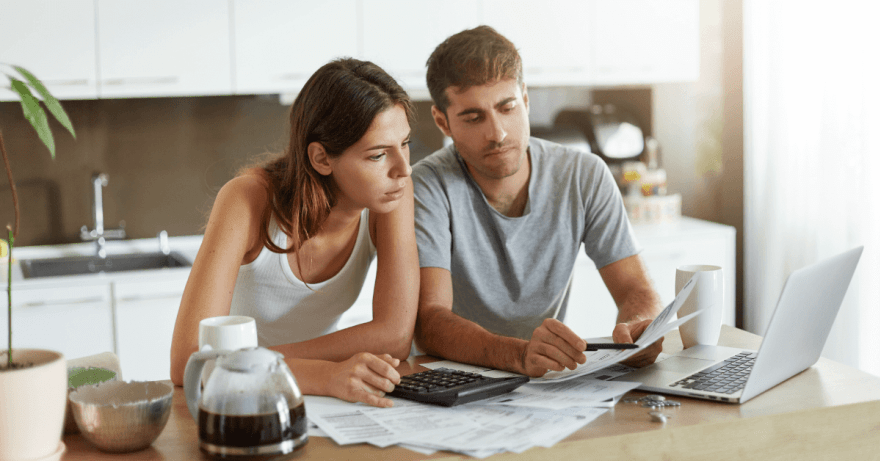 Six, in the case of an international or domestic economic shock (such as a major foreign financial institution declaring insolvency) which results in economic growth collapsing and unemployment rising, household deposits will be heavily drawn upon to fund ongoing household expenditures such as food, transport, utilities, etc, while individuals within the household seek new employment and income generation opportunities.

For households with little financial buffer, any existing cash deposits may delay the inevitable of severe financial hardship for a short of amount of time but will not be able to prevent it.

This point was amplified in a February 2018 speech by Assistant Governor (Financial System) for the RBA, Michele Bullock, who indicated that based on 2017 data approximately 27 per cent of Australian households have paid less than one month in advance on their mortgage.

Moreover, the RBA’s data is also confirmed by DFA’s independent household data which found that approximately 30 per cent of households with an owner-occupier mortgage are experiencing mortgage stress and have little financial buffer to cope with a significant economic or financial shock.

Such debt levels still have the ability to cause immense economic damage throughout the Australian economy.

When considering these seven elements in their totality, it is clear that theses arguing that Australia’s macroeconomy is not experiencing very acute structural economic imbalances and therefore does not pose significant systemic economic risks are misleading and indeed fallacious.

Such public arguments can actually be dangerous as they can serve to make Australians complacent about the systemic risks, challenges and potential consequences facing the Australian economy.

Moreover, such statements may serve to trap Australians into the “she’ll be right’ complacent attitude which has not only been the hallmark of Australian culture, but, in many instances, has ended up in disaster for many unprepared Australians.

Australians must ensure that they don’t fall victim again as we potentially head into the greatest economic crisis of our lifetime.