Australia's Dollar Has Collapsed 76% In 21 Years

Australians continue to be confused as to how to measure the purchasing power of the Australian dollar.

In recent decades, various Australian Federal Governments, mainstream economists, financial institutions as well as media commentators have made numerous statements regarding the relative strength of the Australian dollar which have resulted in economic and public policy conclusions being drawn.

This commentary, which is in part based on economic concepts such as Purchasing Power Parity (or PPP) [1], has led many Australians to come to the belief that the appropriate gauge to measure the relative strength of the Australian dollar is by comparing the dollar against other government issued fiat currencies such as the US dollar, the British Pound, the Euro or the Japanese Yen.

However, Australians who use this form of currency value measurement have significantly misperceived the real value of the Australian dollar and moreover, have failed to acknowledge a sustained collapse in the dollar’s value over, at least, the past two decades.

This misperception has led many Australians to misunderstand:

The USD/AUD exchange rate value fell further and bottomed at 0.4833 USD/AUD on 3 April 2001 which corresponded with the collapse of the internet technology stock market bubble and the simultaneous cyclical bear market in key mining commodities.

This wild oscillation of the AUD-USD exchange rate is shown in Graph 1 below. 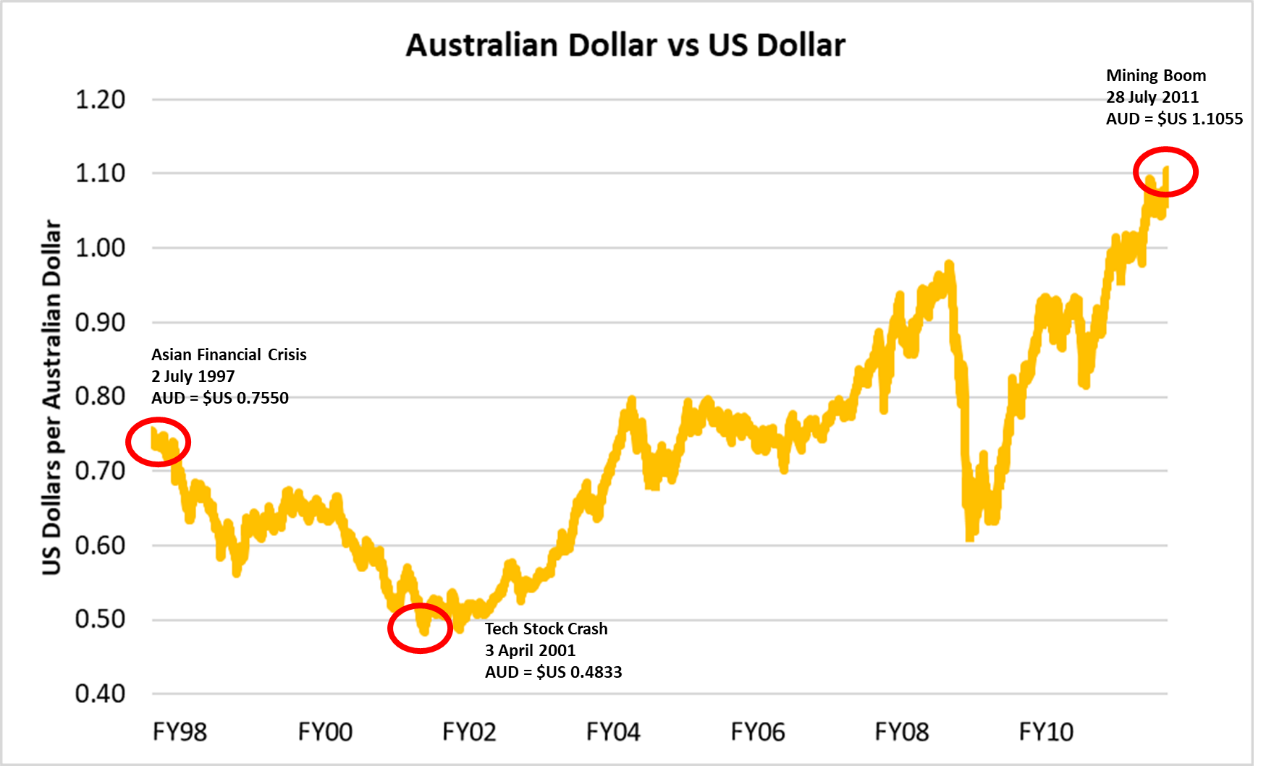 The Evolutionary History of Money

For many Australians, the fluctuations in the relative value of the Australian dollar, on an AUD‑USD exchange rate basis, has not been a serious cause of economic concern and therefore has not been identified as necessarily a public policy problem by the Federal Government, public policy experts, professional economists or the media.

However, measuring the value of the Australian dollar in this fashion (which may include using exchange rates that involve other government-issued currencies such as British Pound, the Euro or the Japanese Yen) ignores the evolutionary history of money that has largely taken place over the past 200 to 250 years. This has resulted in an incomplete analysis and consequently for Australians to draw the wrong conclusions.

This evolutionary history of money is central to understanding:

This evolutionary history of money is outlined below in four broad phases (also see picture 1).


Phase 1 – Money Supply dominated by ‘Hard Money’ – under this phase, the supply of money that operates within an economy is dominated by a physical commodity that is used as ‘a unit of account’, ‘a medium of exchange’ (in commercial transactions) and as a ‘store of value’.

For the past 5000 years, the most common and durable form of ‘hard money’ across the world has been physical gold and silver.


Phase 2 – Government issues ‘Currency’ which is backed by ‘Hard Money’ – under this phase, governments that are responsible for managing the supply of money in their economy issues currency that is physically backed by gold and/or silver (i.e. is redeemable in physical gold and silver upon demand). Such currency could include physical currency notes or gold and silver redeemable certificates.

Currency is issued by governments as it is more efficient to trade in redeemable currency notes or certificates rather than having to physically transport and exchange physical gold and silver as settlement for every commercial transaction.

Under this phase, the total quantity of currency that a government can issue is limited by the physical quantity of gold or silver held by the government which can be used for physical redemption of the currency notes or certificates.

From 1944 – 1971, the international monetary system was based on a physically gold backed US dollar, meaning that while the US dollar was used to settle international transactions, US dollars issued could be converted into gold upon demand.

The decoupling of currency from hard money is an event which has taken place across several instances throughout history and typically occurs when governments are involved in wars. Examples include:


Phase 4 – Government issues ‘Fiat Currency’ –under this phase the quantity of unbacked currency (including other forms of money) is set by the issuing government (i.e. by government decree). This form of currency is referred as ‘fiat currency’ which in Latin means "let it be done" or "it shall be”.

Government issued fiat currencies have no intrinsic value and have consistently failed as accepted forms of money for the past thousand years as a result of excessive currency creation.

The first example in recorded history of a paper-based fiat currency being used and then abandoned was in the 11 th century (1024 A.D.) in China.

The international monetary system has been based on a US dollar fiat currency system (i.e. the US dollar not backed by physical gold) since the closing of the gold convertibility window by President Nixon in 1971.

Picture 1: The four phases of the recent historical evolution of money

In light of the four phases as outlined above, Australians should note that:

On this latter point, it is important to note that forms of ‘hard money’ such as physical gold and silver should be viewed as retaining a constant unit of account (e.g. an ounce or gram of gold) and that the value of a government-issued currency (e.g. the Australian dollar) fluctuates consistent with the management of the currency by the issuing government [2].

Hence, under this view, the price of gold or silver has not gone up or down, but rather the value of the Australian dollar has risen or fallen relative to say an ounce or gram of physical gold [3].

In this context, the value of the Australian dollar has experienced a sustained and dramatic fall of 76.2% over the past 21.5 years since the onset of the Asian Financial Crisis relative to ‘hard money’ such as physical gold. 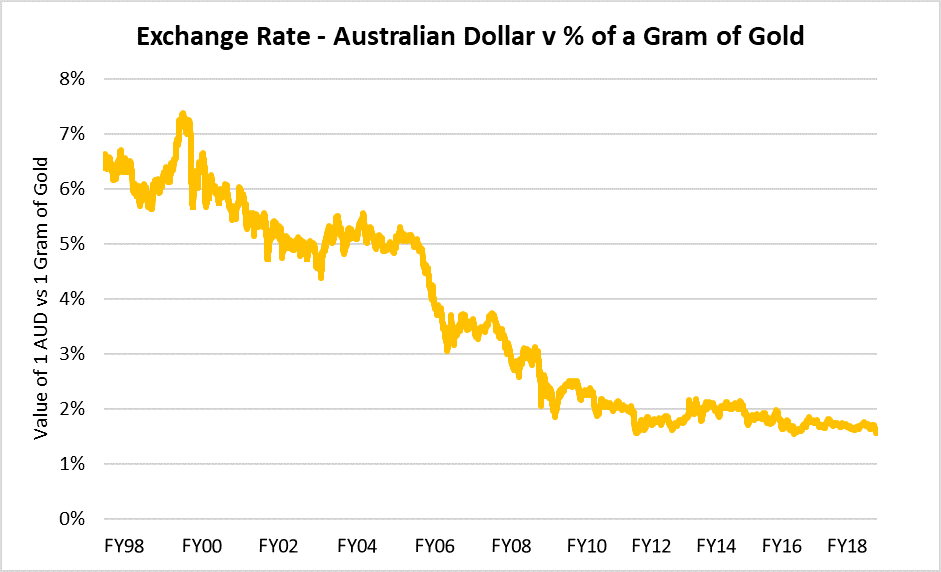 This sustained collapse in the value of the Australian dollar is a dramatic alternative interpretation as to the dollar’s purchasing power compared to the AUD‑USD exchange rate.

When the Australian dollar is viewed in the context of gold, Australians should note that:

Moreover, the conclusion reached by former Prime Minister John Howard in relation to the 1997 Asian Financial Crisis that:

“The flexible exchange rate then enjoyed by Australia played a crucial role in our avoiding the impact of the Asian economic downturn. An economic adjustment, as a consequence of the downturn, was unavoidable. That adjustment was taken on the exchange rate. The value of the Australian dollar fell.

Wisely the Reserve Bank kept its nerve by not lifting interest rates, and we rode through the Asian economic decline virtually unscathed.” [4]

Rather, the failure of his Government (as well as subsequent federal governments) to defend the value of the Australian dollar relative to traditional forms of ‘hard money’ have had sustained and consequential impacts on the Australian economy two decades later including crippling cost of living pressures and the largest real estate price and household debt bubbles in Australian history.

[1] The theory of PPP states that the exchange rate between two countries is equivalent to the ratio of the currencies’ respective purchasing powers.

[2] The annual global supply of gold has grown in the past decade at a consistent rate of 1.75% - 1.8% relative to the total global stock of gold whereas government-issued forms of currency has grown substantially higher.

[3] Viewing the domestic currency as a constant unit of account (e.g. the dollar) is known as ‘nominal confusion’ and is an economic behavioural phenomenon that has occurred consistently throughout history. For example, during Germany’s 1923 hyperinflation episode, many Germans interpreted the US dollar or the British Pound as continuing to rise in value as oppose to the understanding that the German Mark was rapidly falling in value.