The Chairman, as part of this speech, outlined a range of policy initiatives that APRA has implemented in recent years to reduce risky lending practices by domestic authorised deposit-taking institutions (ADIs) as well as provided details of APRA’s industry stress test which was conducted during 2017.

While APRA tested the financial resilience of domestic ADIs across a range of scenarios, APRA’s Chairman was keen to publicly disclose the outcomes of its worst‑case scenario, which APRA categorised as a ‘severe, but plausible’ event.

This event was predicated on the assumption that a downturn in China would lead to a collapse in demand for Australian commodities which would in turn lead, over a period of approximately three years, to:

As part of this scenario, APRA also assumed the realisation of an ‘operational risk event’ involving misconduct and mis‑selling in the origination of residential mortgages. Such an assumption would appear to be an attempt by APRA to model the recent behaviour of Australian ADIs as recently revealed by the Royal Commission into Banking. 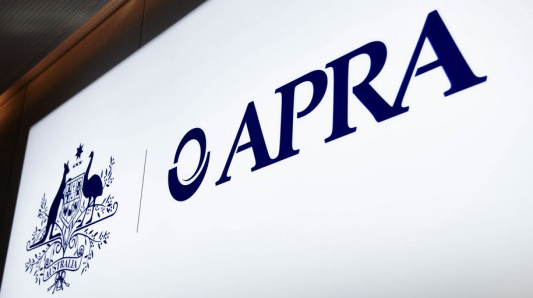 The conclusion of APRA’s industry stress test was that Australian ADIs would suffer capital losses on their residential mortgage books of $AUD 40 billion over an approximate three-year period, which, while damaging, would not result in any Australian banks failing.

This quantum of capital loss, APRA claims, would be equivalent to losses experienced in the United Kingdom in the early 1990s, but would be less than what was experienced by either Ireland or America during the GFC.

Alarmingly, APRA’s $40 billion capital loss calculation, to which no documentary evidence justifying the calculation has been published, has already been criticised and disputed by independent analysts.

LF Economics analyst Lindsay David, using Westpac’s loan data as recently revealed at the current Banking Royal Commission, as a representative baseline for the Australian banking industry, estimated the potential gross capital loss for Australian ADIs on their residential mortgage books under APRA’s ‘severe, but plausible’ scenario would amount to a stunning $AUD 298 billion over the same 3‑year time period.

It is important to note that in LF Economics’ calculations is the use of their conservative assumption that only the riskiest fringe of borrowers default, that being borrowers who borrowed 11 times or more than their income or borrowers who have monthly uncommitted income of $AUD 70 or less.

Alternatively, Principal Analyst Martin North from Digital Finance Analytics using data from his own exclusive and extensive 52,000 Australian household surveys and surveys of small and medium enterprises coupled with his own independent economic model, calculated that the gross losses to Australian ADIs would be approximately $AUD 310 billion over five years.

These significant disparities in estimated capital losses are concerning and requires prompt clarification by APRA.

However, the frightening reality of APRA’s stress test claims lies in the definition of its ‘severe, but plausible’ scenario.

On 25 September 2007, ABC Economics Correspondent Stephen Long reported the observations of the then Deputy Governor of the Reserve Bank of Australia (RBA) Ric Battelino that Australian debt levels were higher in September 2007 than the 1880s and 1920s which, in both cases, preceded the two major depressions of 1892 and 1931 experienced in Australia history.

Importantly, Australia’s astronomical debt levels comes at a time when global debt is at an all-time high of $USD 247 trillion as reported this week in the Washington Post , or 318 per cent of global GDP.

Hence, it is beyond dispute that Australia is currently experiencing the biggest debt bubble in its history at the same time we are in biggest global debt bubble in the history of the world.

Given this frightening observation, it is stunning that APRA did not reference Australia’s previous economic depressions as a baseline worst-case scenario or in official parlance a ‘severe, but plausible scenario’.

APRA has, to date, provided no public justification as to how its ‘severe, but plausible’ scenario was derived nor why this scenario is appropriate to test the financial resilience of Australian ADIs and the broader domestic financial system.

According to a June 1999 RBA research paper titled Two Depressions, One Banking Collapse , in both the 1892 and 1931 depressions, real GDP in Australia fell by approximately 10% within the first 12 months of each respective depression hitting [1]. 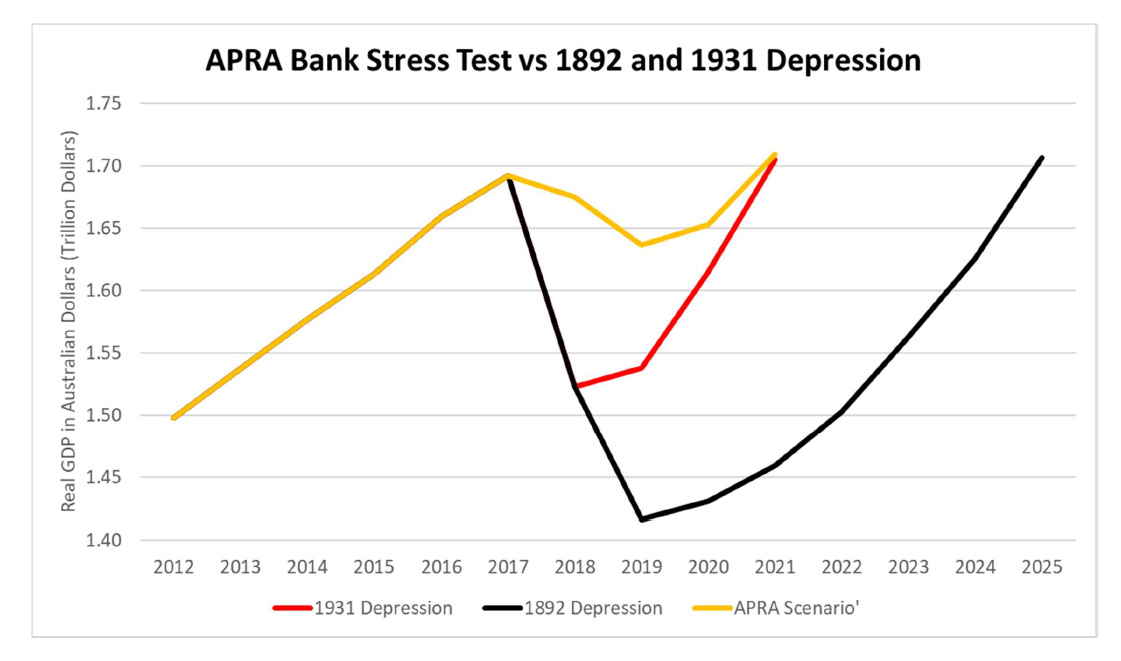 The 1892 depression, which was caused by rampant property speculation and debt accumulation during the 1880s, was the more severe economic depression in Australia as it involved more than half of the trading banks of note issue suspending payment and a large number of non-bank financial institutions failing resulting in real GDP falling in 1893 (i.e. year 2) by a further 7 per cent.

In both previous episodes, the cause of these depressions was due to an economic shock resulting from a failing European bank such as Barings Bank in 1890 (London, United Kingdom) or Credit‑Anstalt in May 1931 (Vienna, Austria).

Given record global debt levels and highly leveraged capital markets within a globally integrated financial system, coupled with global systemically important banks as well as other sizeable financial institutions which both hold significantly large portfolios of financial derivatives, it is not a far‑fetched proposition, especially in an increasing interest rate environment, to stress test Australian ADIs in a scenario of a failing foreign bank or perhaps even banks plural, given likely contagion risks.

Under such a scenario, APRA’s 4 per cent decline in real GDP over a three-year period and unemployment of 11 per cent, given domestic historical precedence, would be both an underwhelming and inappropriate assumption.

Moreover, and importantly, if the explosion of smaller debt bubbles resulted in at least a 10 per cent decline in real GDP in the first 12 months, one could reasonably assume that the popping of Australia’s current debt bubble given its relative historical size would result in a greater collapse in real GDP by more than 10 per cent.

However, if the performance of the Australian economy during the 1892 and 1931 depressions were used as a worst-case scenario baseline and if the independent calculations of Lindsay David and Martin North were adopted, then the potential gross capital losses to the bank’s residential mortgage books, extrapolated on a linear basis, would be in excess of $AUD 745 billion over a three to five-year time horizon.

Such losses, if realised, would bankrupt several domestic financial institutions and Australia would descend into a world of a genuine ‘mad max’ armageddon that would deliver unimaginable economic and social horror upon the Australian people. 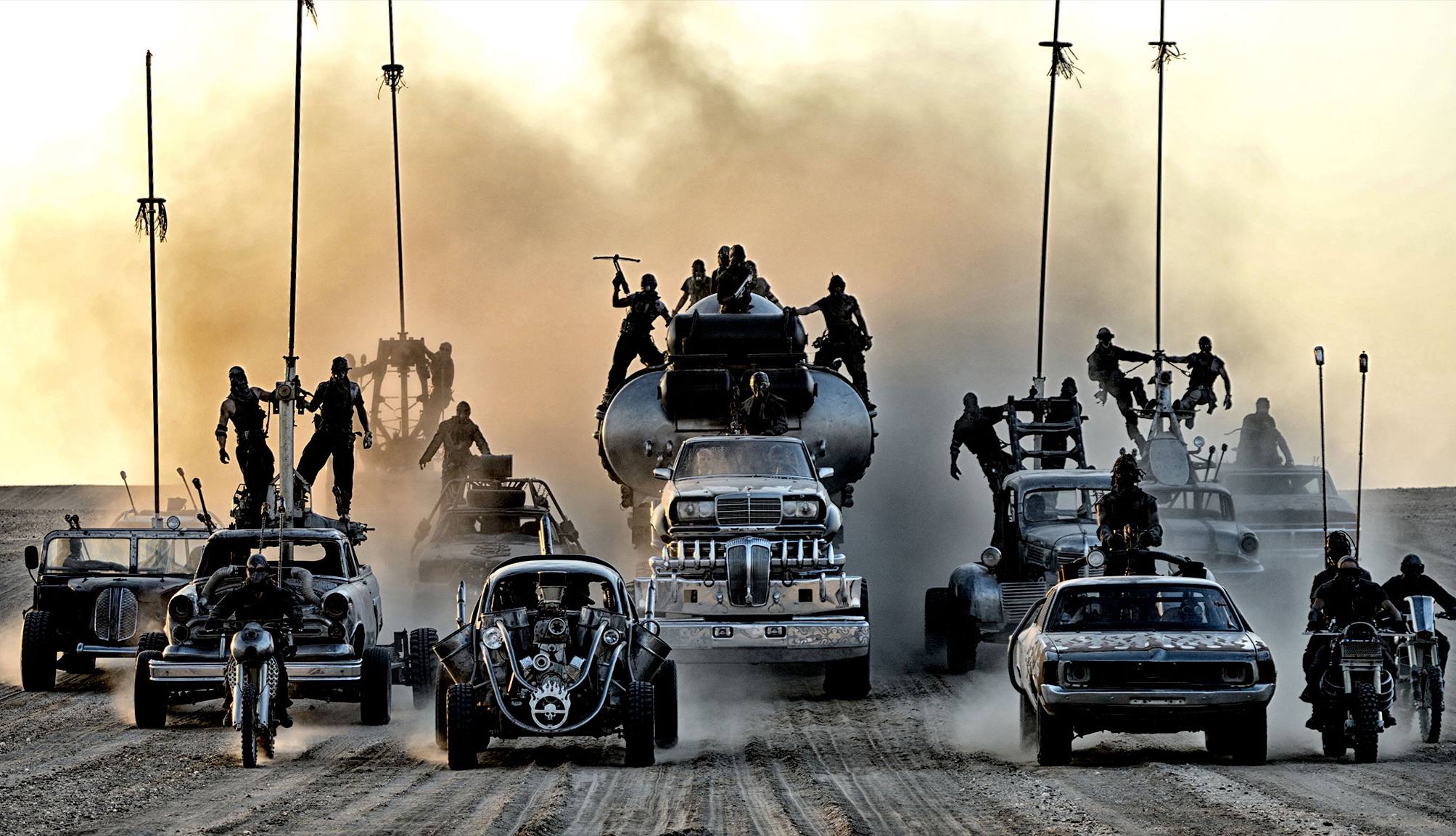 The only plausible rationale which would justify APRA’s 4 per cent fall in real GDP scenario is if, in the face of an international economic shock, Australian policy makers unleashed unprecedented amounts of fiscal and monetary stimulus (including at least official interest rates of zero per cent) which would make the Rudd Government’s 2008 GFC response microscopic in the annals of Australian economic history.

Such a response would also require major foreign governments and world central banks to unleash, in a coordinated fashion, extraordinary amounts of stimulus which would dramatically out match the $USD 15 trillion printed by world central banks after the 2008 GFC.

In such extraordinary circumstances, neither APRA nor any other Australian public official could accurately forecast what would occur to Australian real GDP and unemployment under such action which would be unparalleled in the history of humanity.

Moreover, international economic institutions such as the Bank for International Settlements, the International Monetary Fund or the World Bank would struggle to calculate, with any degree of precision or confidence, the quantum of stimulus required to engineer a fall of real GDP of only 4 per cent or less and what impact such stimulus would have to the confidence and value of major fiat currencies as well as the broader international monetary system.

Nor could these institutions anticipate whether such stimulus would be politically acceptable among the citizens of major powers, given existing high levels of public mistrust and the current rise of populist movements.

It is abundantly clear that the purpose of APRA’s industry stress test is not to objectively assess the robustness of Australian ADIs under genuinely plausible economic conditions, but rather it is a public relations operation designed to artificially boost confidence in the Australian economy and domestic financial system.

However to achieve this objective, APRA can only design economic scenarios in which the banks can pass and in doing so, they have had to airbrush Australian economic history.

John Adams | Chief Economist at As Good As Gold Australia

[1] While creditable data is scant, the paper draws on available sources to state that unemployment during the 1930s rose above 30 per cent.