The official countdown to Economic Armageddon has now begun.

In the past 24 hours, the most accurate signal of a US economic recession (i.e. two or more quarters of negative economic growth) has manifested itself in the US Bond market - that being an inversion of the ‘1-year to 10-year’ yield curve.

An inversion of the yield curve is generally an unusual economic occurrence and signifies that:

This technically means that market demand for short-term bonds has fallen, while demand for longer-term bonds has risen thus making it more difficult for banks and other financial institutions to lend more profitably resulting in a credit squeeze.

This occurrence is opposite to what typically happens in a healthy economy, where government and corporate bonds that have longer maturity periods pay investors higher interest rates.

“Every recession over this period (January 1955 – February 2018) was preceded by an inversion of the (1 - 10 year) yield curve, that is, an episode with a negative term spread.”

Over this period, 1955 – 2018, an inversion of the ‘1-year to 10-year’ yield curve has occurred prior to nine economic recessions and has only produced one false positive reading that being in September 1965, where an inversion of the yield curve proceeded an economic slowdown (economic growth only grew by 0.06% in the 2 nd quarter of 1967) but not an official economic recession.

An economic recession has not occurred in the United States over the past 50 years without a preceding inversion of the ‘1-year to 10-year’ yield curve occurring.

From a timing perspective, an inversion of the ‘1-year to 10-year’ yield has signalled, across the last 7 recessions dating from 1969 – 2019 (see Graph 1 below), that an economic recession (i.e. two or more quarters of negative economic growth) in the United States will commence between 3 ‑ 27 months after the inversion as shown in Table 1 below. 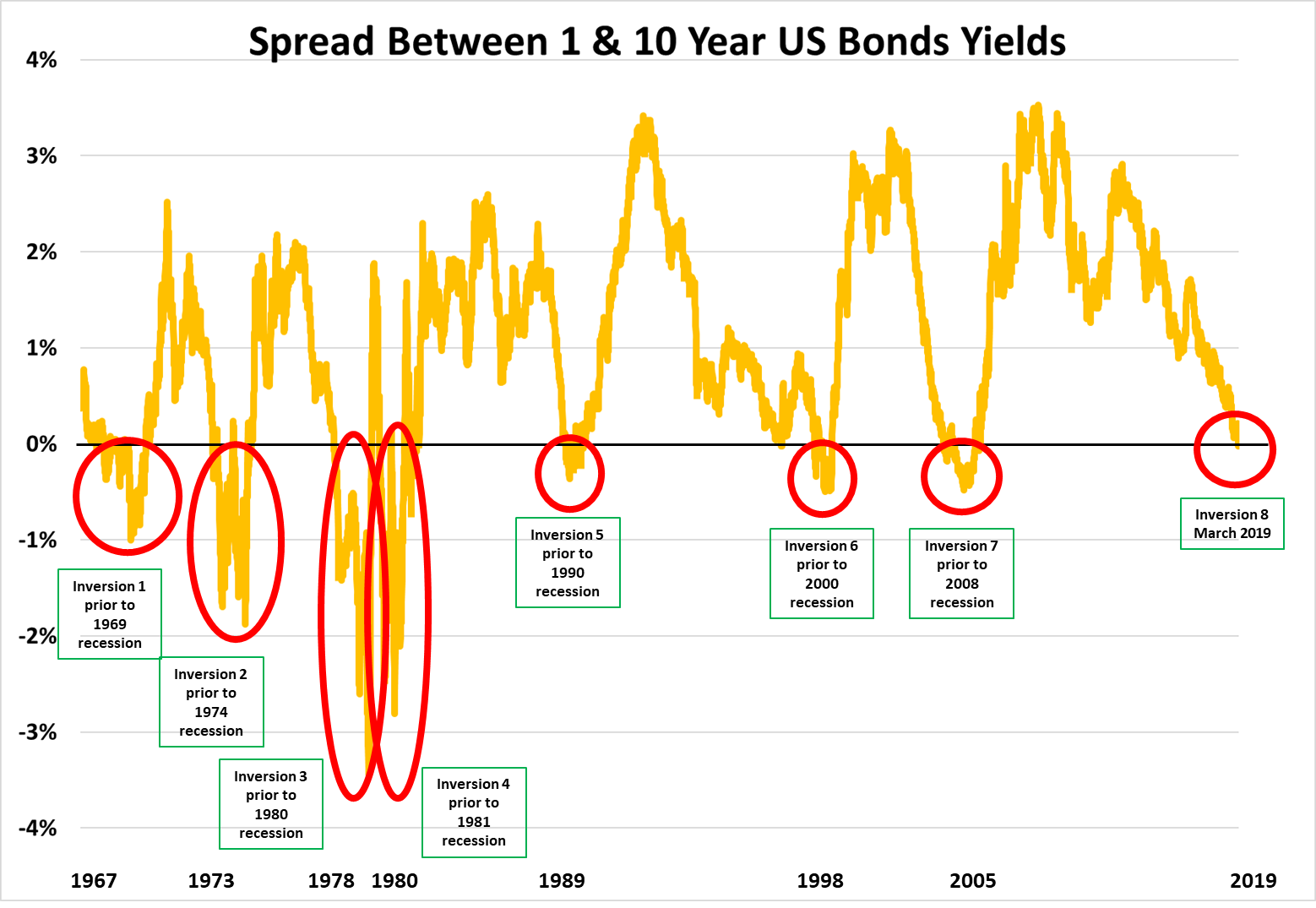 A US economy that is headed towards recession is likely to have material implications for world financial markets and the global economy, especially given that:

With the largest economy in the world and the centre of world financial markets now on track towards an economic recession, there can be no question that Australia will be impacted. The outstanding issue is by what degree.

A lot will depend on the policy decisions made by governments and central banks both in Australia and around the world as well as the timing and sequence of these decisions.

For example, if policy makers continue to implement contractionary macroeconomic policies whether they be of a monetary (including quantitative tightening), macroprudential or fiscal nature, the US and global economies could reach a point where either higher interest costs, collapsing credit growth or a lack of financial liquidity could make global debts unserviceable resulting in:

Alternatively, US and global policy makers, knowing that the US economy is on track for a recession, could start to implement pre-emptive fiscal and monetary stimulus measures such as lowering interest rates, ending quantitative tightening, re‑instituting quantitative easing, introducing Universal Basic Income (based on exotic theorems such as Modern Monetary Theory) or providing fiscal incentives to defend and protect the global debt bubble in order to soften the economic slowdown and/or official recession.

In either scenario, the policy prescriptions as outlined above is likely to have either a profound deflationary (if global debts become unserviceable) or inflationary (if pre-emptive stimulus is implemented) impact on the Australian economy that will materially affect living standards.

It is very likely that Australians who either:

will face significant economic adversity, especially if they have not taken any preparatory steps before global economic events begin to intensify.

Now that the clock towards Economic Armageddon has now officially started, Australians, who are awake, will be rushing towards the exit doors before it is too late.

Australians still do have time to financially and psychologically prepare themselves, but the window to do so is closing fast.